The identification of amanita is not easy. There is no common visual criterion that distinguishes them from other groups including the Lepiota who resemble them; in addition, many species are similar and in some cases chemical reagents must be used to distinguish them. We describe here the criteria which allow to characterize amanita.

Habitat is often used as a factor to distinguish species from each other, but the characterization of habitats and mycorrhizal associations is very incomplete. We attach here a table of the contradictions encountered during this study and which can lead to errors. 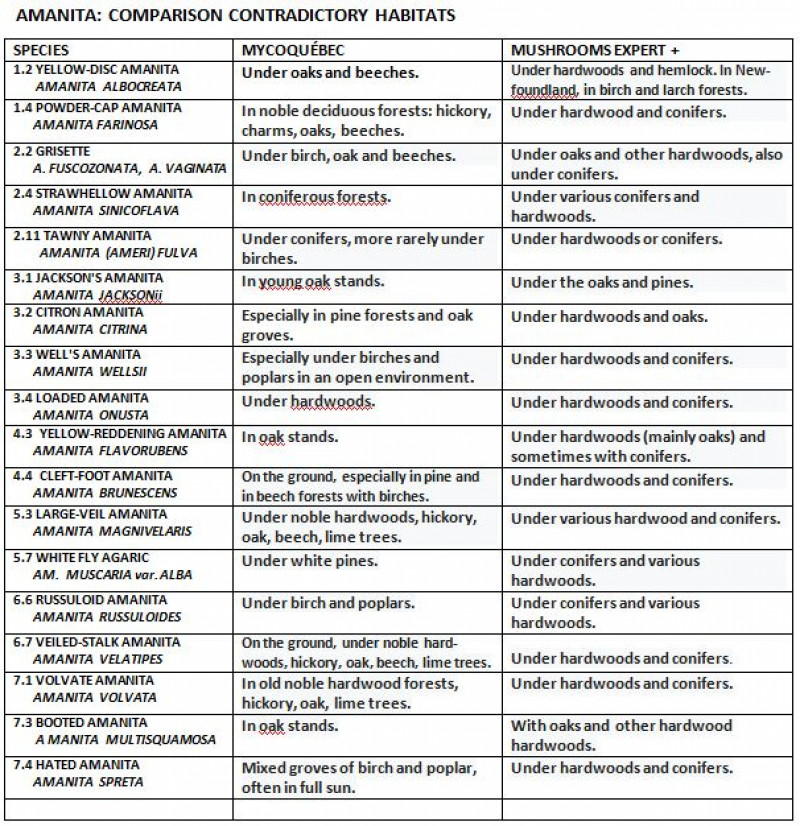 The profile is characterized when the cap is fully open. In young age, all the fruitbodies are stocky. As the stipe lengthens and the cap opens, the final profile is revealed. 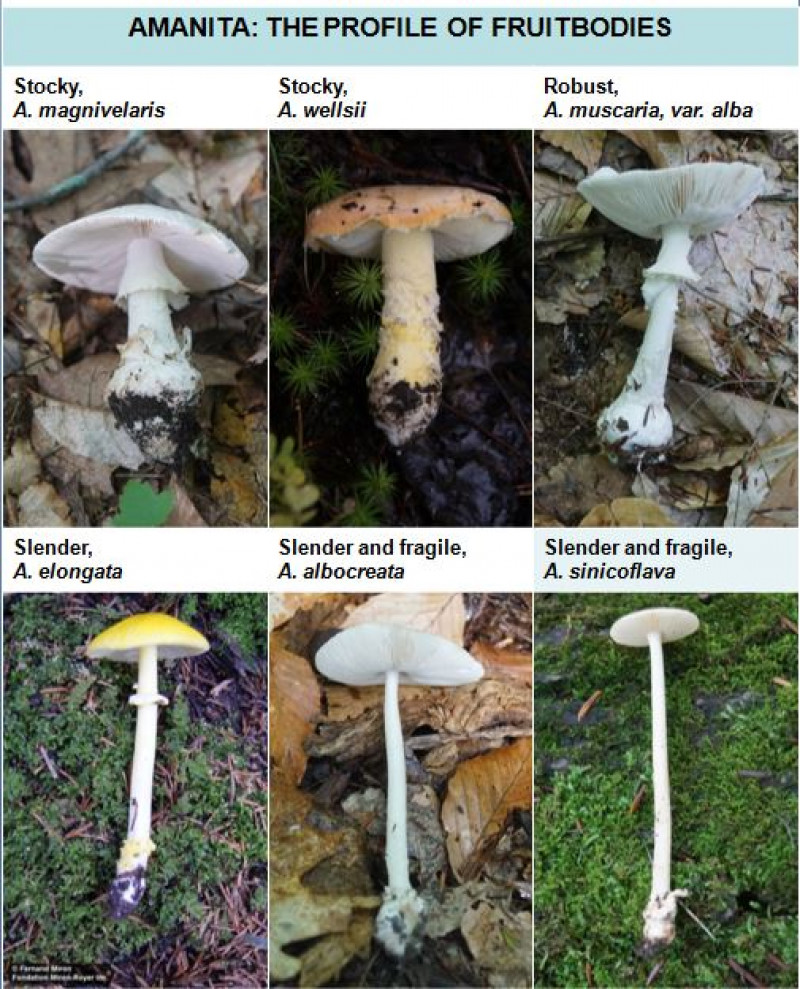 The color of the cap is an important criterion and will be described on the record of each species. By breaking, the universal veil often leaves on the cap remnants which take various forms: in patches, in the form of warts or cones, of triangular pyramidal shape, in the form of fibrils, squamules or even a thin powdery layer. We illustrate here some of them. 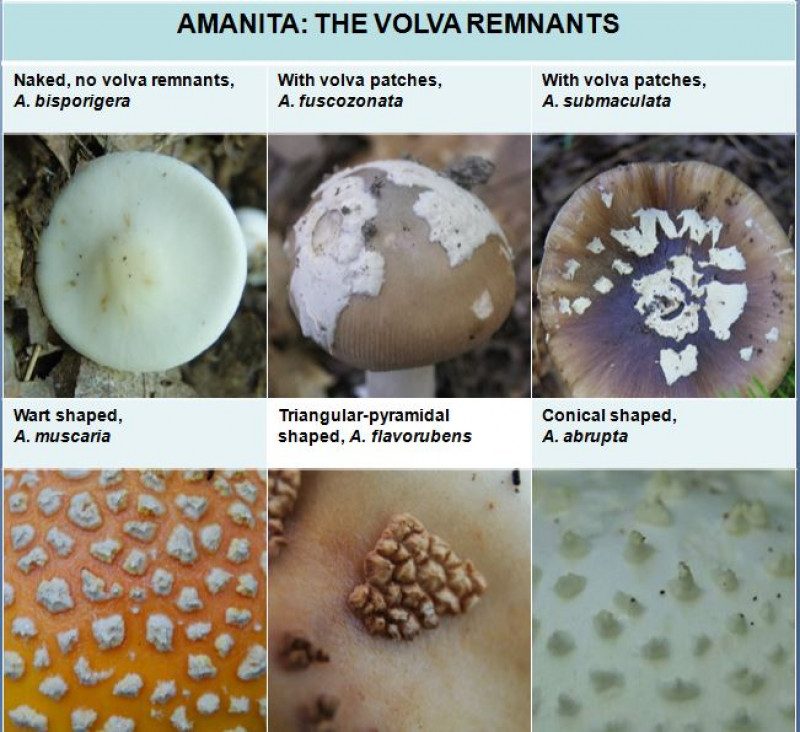 The ridges that adorn the margin is a criterion often used in identification keys. Be careful because caps described without ridges can become striate at maturity as illustrated in the table on this page. This margin can be plain (without ridges), short, long or weakly striated; the ridges can appear from a young age or be present only at maturity. For the same species, some caps may become short striated at maturity, while on others the margin will remain smooth, without any ridges. The terms with ridges or striated or lined are equivalent and used interchangeably according to the choice of the authors. 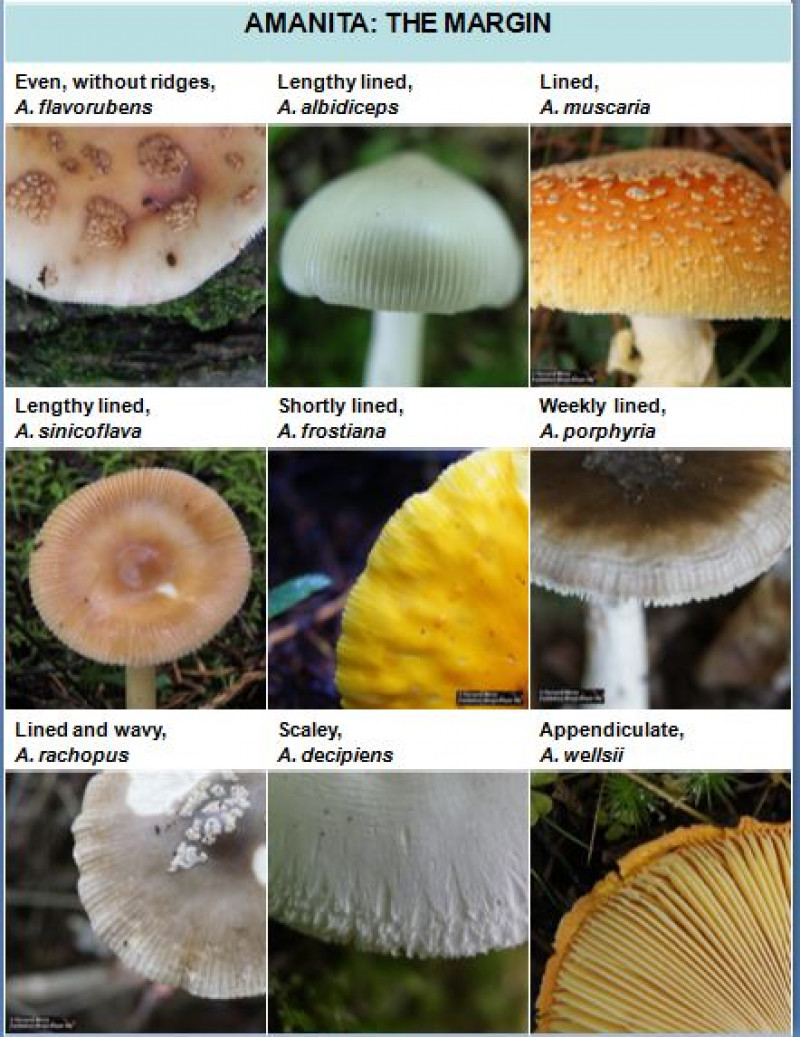 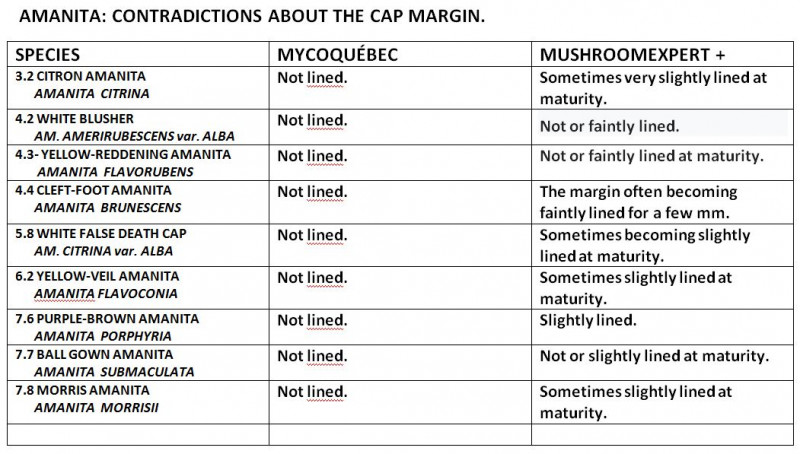 The terms spaced, crowded, close, tight and very tight are confusing because they are used differently according to the authors. On the other hand, the truncated and attenuated terms to describe the short gills are much more precise. The edges of the gills are generally smooth or entire, but some can be toothed, flaky or powdery. The gills of most species are white, but some may be cream, pink or change color with age. 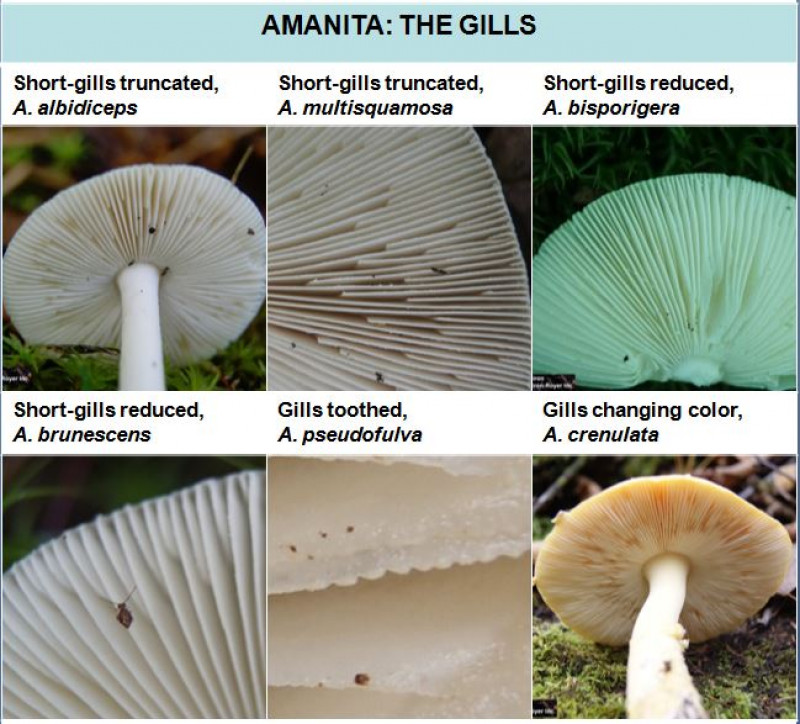 Several amanita don't have a partial veil, but for others this partial veil is an important criterion for their identification like the color, the thickness, the color which turns yellow with age or the few traces left at the top of the stipe. We illustrate here some of them. 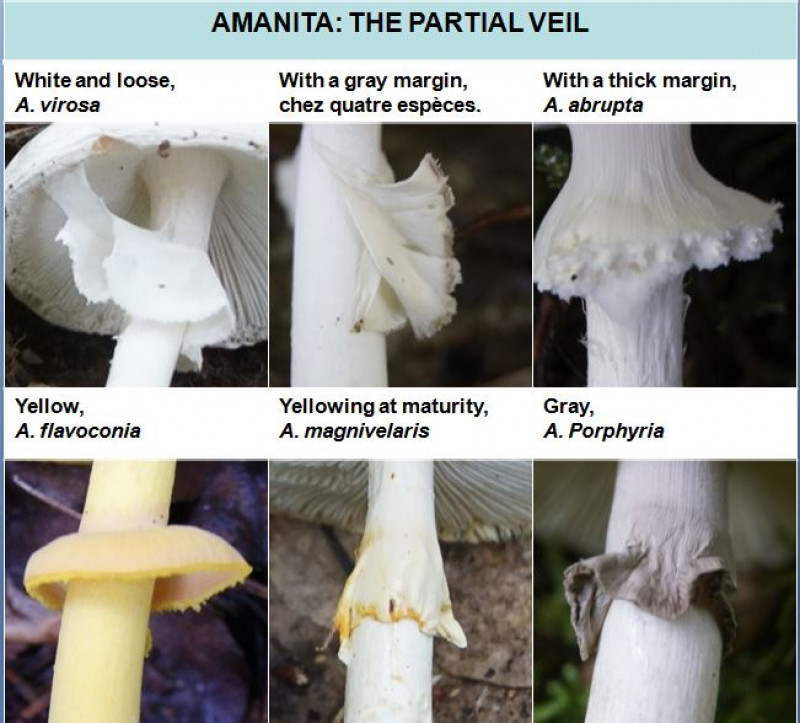 The stipe can be smooth, fibrillous, scaly, mottled or decorated with velar remains sometimes arranged in circles around the stipe near the base; the term mottled is used when the fibrils or scales are arranged in a repeating pattern. The stipe can be equal or widened downward or upward, full or hollow, fragile or robust. 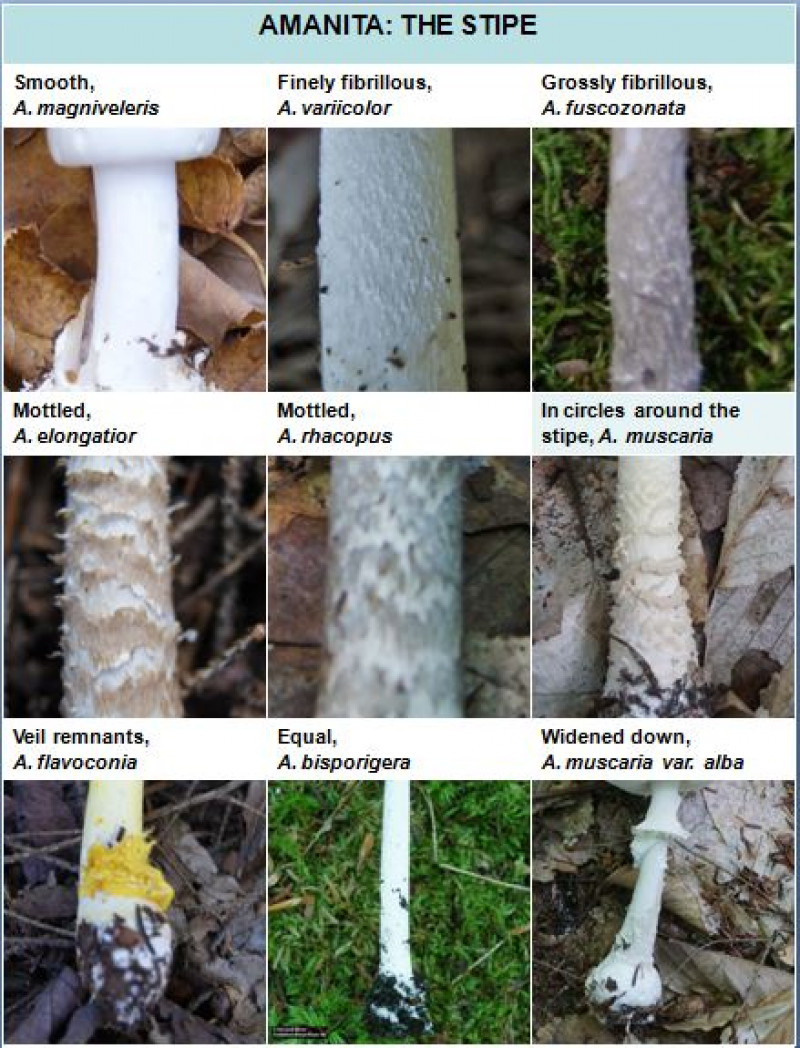 The base of the stipe can be bulbous or not. Sometimes the volva that surrounds the base can give the impression that the stipe is bulbous when it is not. If there is a volva, it is better to make a cut or release the stipe of its volva to make sure. The stipe can be slightly or strongly bulbous. The bulb can appear in various forms: rounded, attenuated upwards, marginated, surrounded by a collar, with a distinct rim. etc. The shape of the bulb is an important criterion for the identification of amanita and it is necessary to dig up the stipe carefully in order to preserve its completeness. 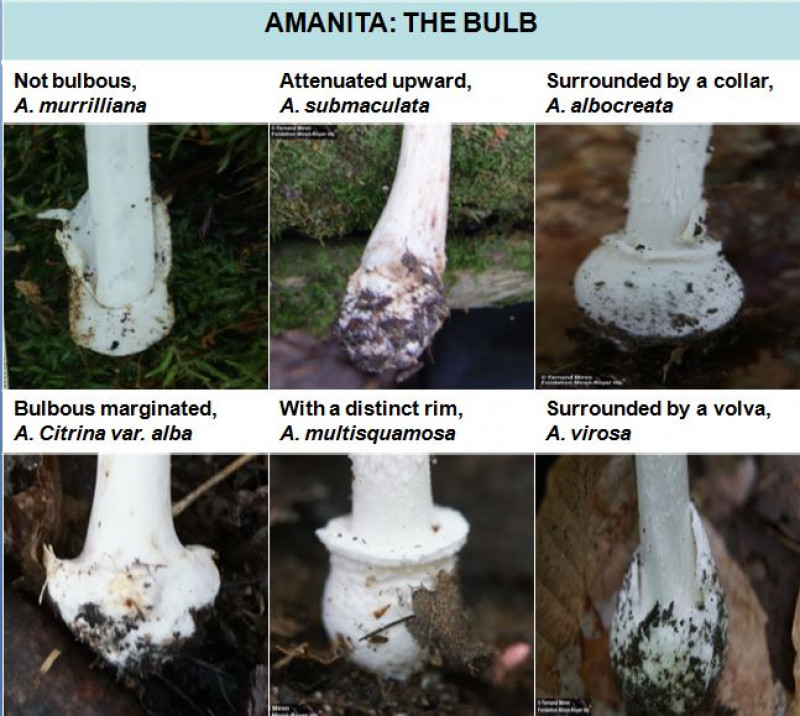 The shape of the volva and its color are important criteria to characterize many amanita: in the shape of a glove finger or bag, thin or fleshy, forming at the top of it a gray strip very visible or not very pronounced, etc. Some stipe don't have a volva or this may be present in the form of traces on the bulb. The majority are white, but some are colored. 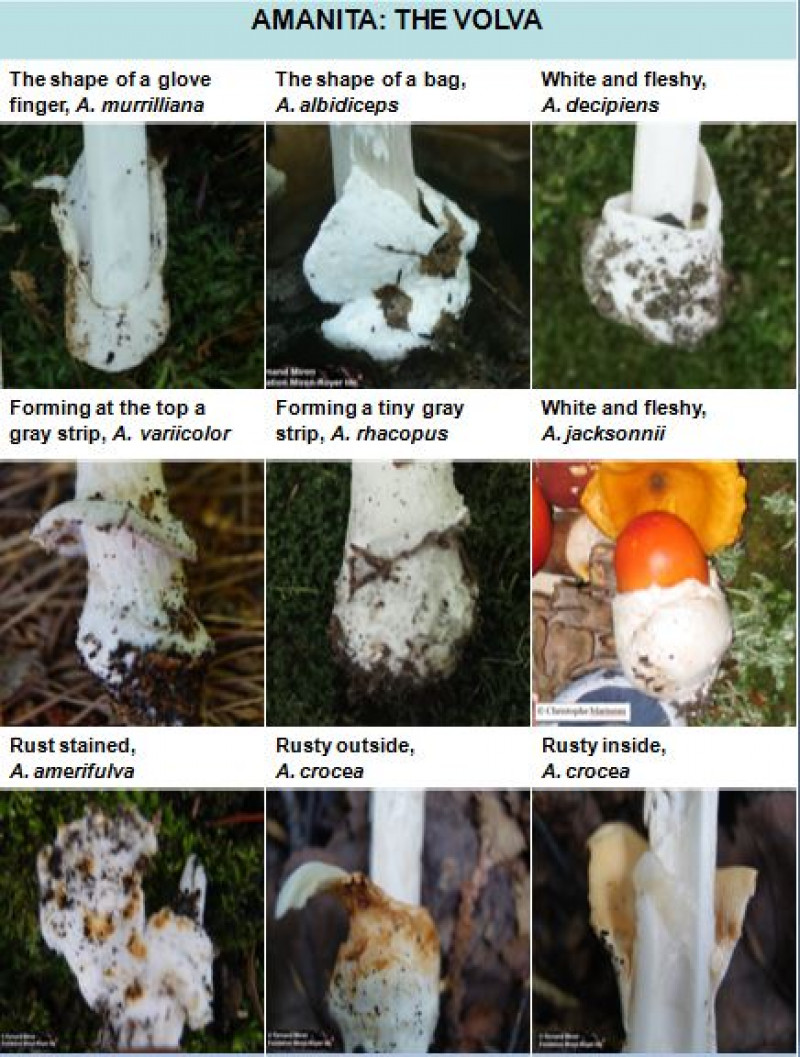 The vast majority of amanita have unchanging white flesh when cut or crumpled. A small group has flesh that changes color when exposed to oxygen from the air, but this change is very slow and it is best to look around the galleries dug by insect larvae or in the wounds inflicted by slugs. 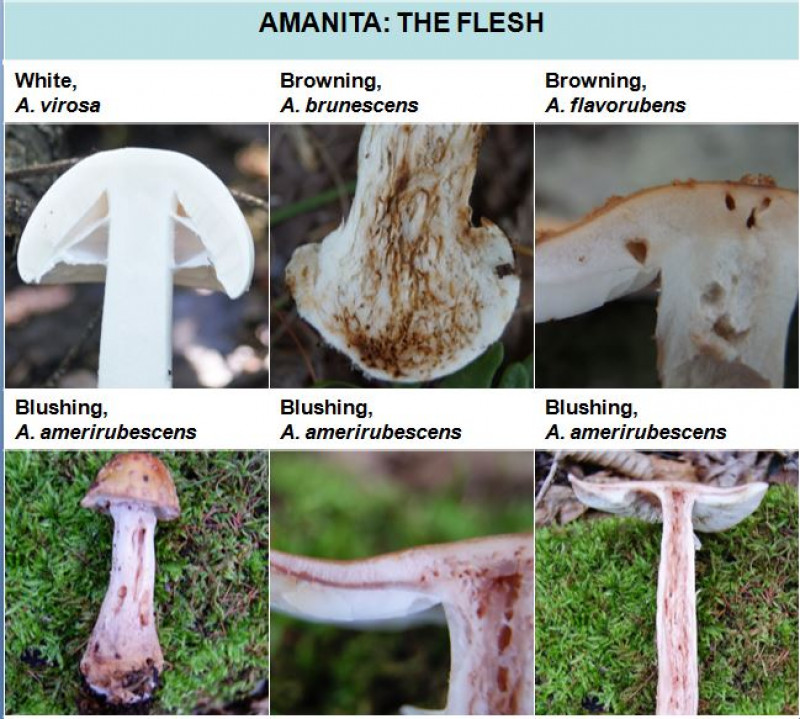 Under the effect of chemical reagents, the flesh, cap or stipe can change color; this change can be the same on all parts of the fruitbody or be different on one or the other. For some amanita, there is no reaction, while others may be sensitive to one or more reagents. The reaction towards the yellow makes possible to differentiate the Destroying Angel from the Large Veil Amanita. The reaction to KOH or NaOH is generally rapid; in the case of phenol, you must wait 20 to 30 minutes to make sure there is a reaction or not. 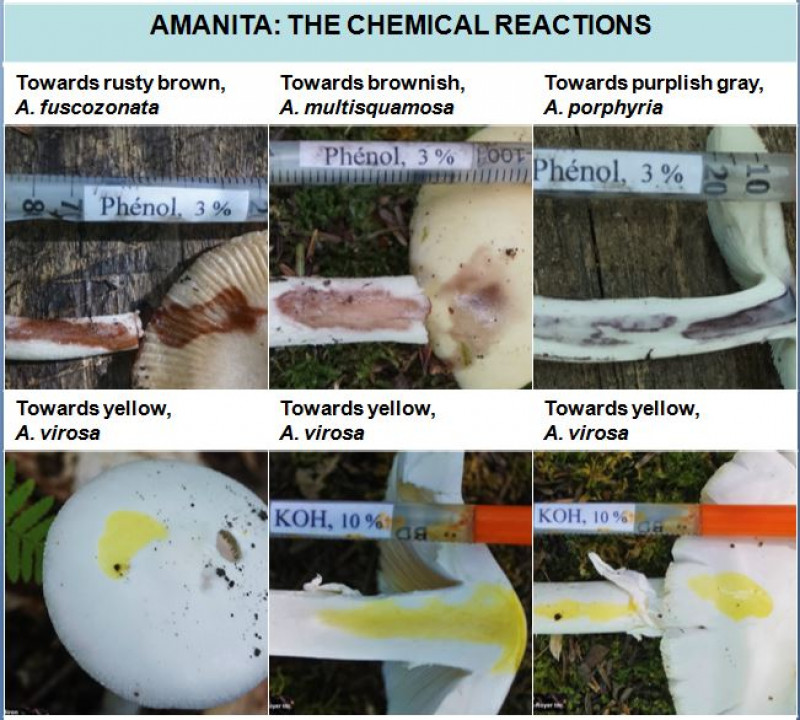