Parts of a Fruiting Body 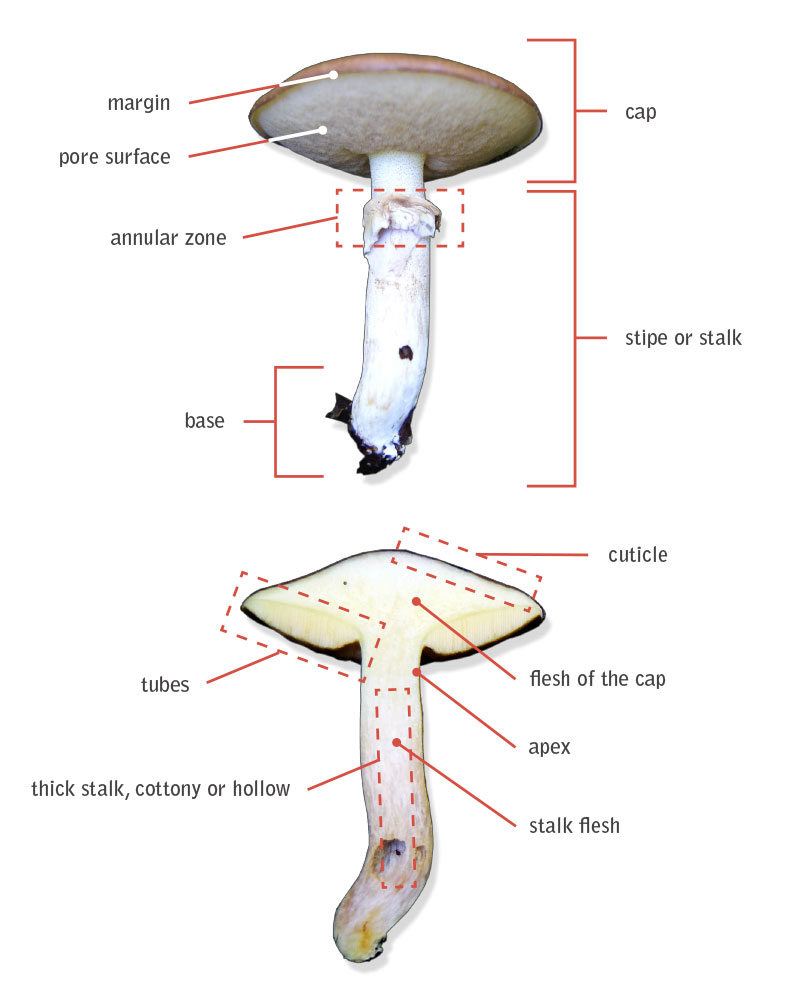 A feature which immediately identifies the species because only one of the one hundred and eleven species possesses it.

In the annular zone near the top of the stalk, one may find three features that can be helpful in identification: a ring, a veil or a gaiter.

The ring (1) forms while the edge of the cap is attached to the stem; when the cap opens, some of this tissue remains attached, encircling the stem. In older specimens, the ring may become less visible.

In some species, the partial veil (2) connects the stem to the edge of the cap and covers the tubes. When this partial or secondary veil is torn, it leaves remnants on the stem. The colour and features of the cap and stem can therefore be different. The envelope totally enclosing the young mushroom often gives rise to a gaiter, but in some species a prominent veil also adorns the top of the stem.

The gaiter (3) resembles a sock covering the stem up to the point where the ring is usually located. If the new mushroom is fully enclosed (in a universal veil) and the veil stretches as the mushroom grows, the veil will tear when the cap opens, leaving remnants of the tissue stuck to the stem, referred to as a gaiter. The stem and the cap are the same colour because they were both covered with the same tissue. The area of the stem above the gaiter up to the tubes is usually white and lacking ornamentation. 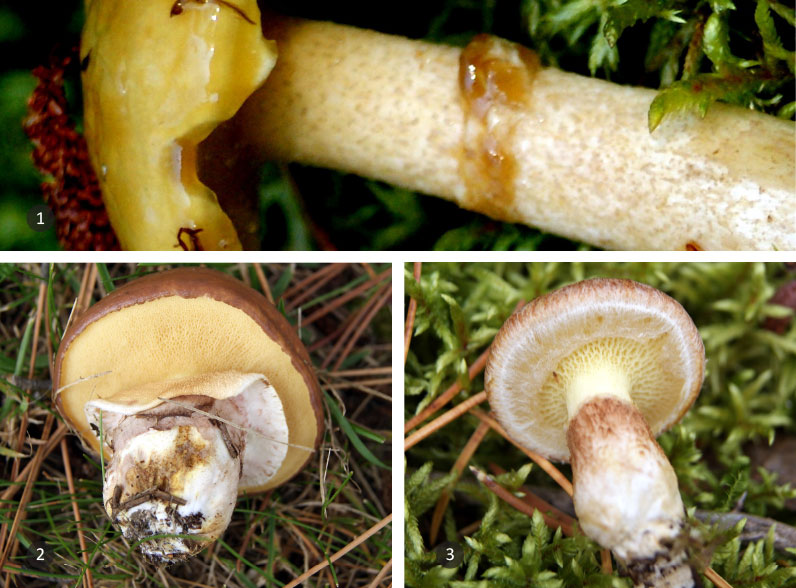 Stalk position beneath the cap

A stem lacking ornamentation is smooth. A rough-stemmed mushroom (1) is scabrous, with surface hairs that are generally black in colour and dry in texture (mainly in the genus Leccinum). A stalk is said to be glandular (2) when it has a sticky surface of small vesicles that contain some fluid (mainly in the Suillus group). The stalk is reticulate (3) when covered with thin filaments crisscrossing the surface like a fishing net.

Slight variations in the colour of the cap can be observed between individual mushrooms of the same species; the main change occurs as the young fruit body grows (4) and the cap spreads (5). The colour is dense in young fruit bodies because the pigments are close together; when the cap opens, the pigments spread out and the colour fades.

The terms sticky and viscous (6) are used to designate mushrooms with caps and often stalks that are covered in a layer of mucus that make them gummy or slimy (primarily Suillus). In dry weather, this slimy layer may become dehydrated and imperceptible. If wetted with a mist of water, the layer will quickly regain this characteristic.

Pitted caps (compared to bumpy (8)) have dented surfaces marked with numerous small depressions (7). This feature is observed when the mushroom is healthy. When the cap ages, the flesh may disintegrate in places, which could distort this feature. 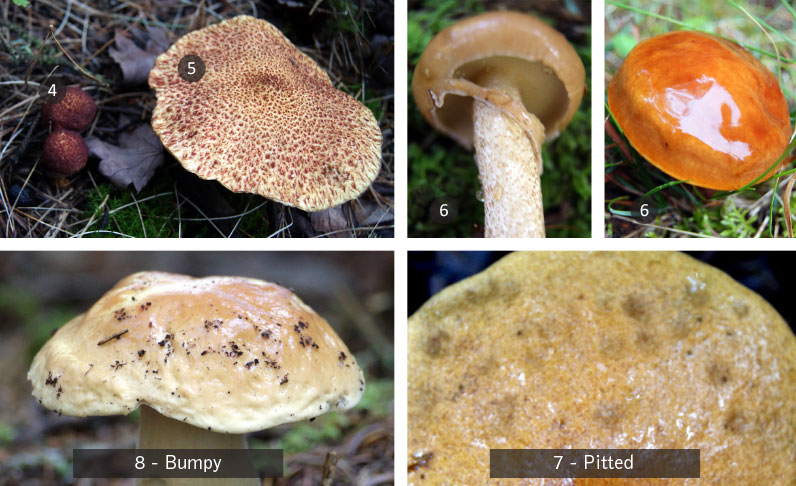 The margin of the cap is referred to as even (1) when it terminates without any ornament, ridge or rib. It is said to be beveled or chamfered (2) when it folds over the tubes at an angle. It is appendiculate (3) if parts of the secondary veil remain attached to the margin of the cap. If the cuticle, the membrane covering the cap, partially spreads apart the tubes, then the margin is referred to as spread apart (4). 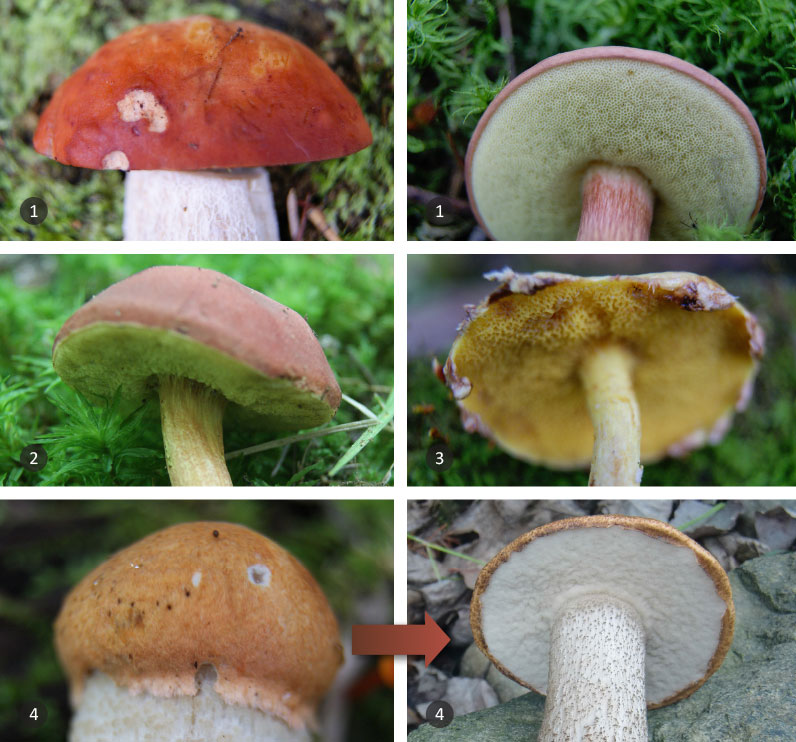 The scales result from the accumulation of fibres that stick to one another, forming small patches and sometimes giving the impression that the surface of the cap is finely cracked. They are mainly observed when fruit bodies are at maturity.

Gluten is a protein found in some cereals, including wheat. In certain fungi, the accumulation of gluten forms a viscous layer on the cap (1), tubes (2) or stalk. When the gluten layer dries on the cap, it shrinks and tears, forming small patches of dried gluten (3). 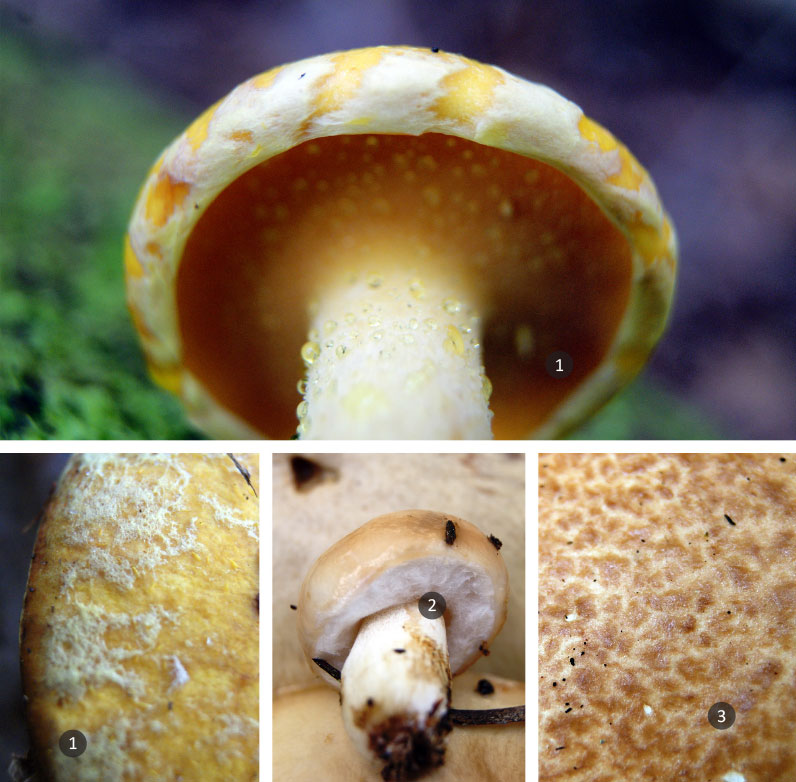 Extremes are easily identified in both of these categories, but there are many intermediate types. Tubes can be straight (1) , bulbous (2) or V-shaped (3).

Tube attachment to the stalk

To determine the shape of the tube pores, the cap must be mature and the pores fully open. Pores are often not visible in young fruit bodies. The main criteria to observe are the shape and diameter of the tube openings and the thickness of the tube walls. To observe these qualities it is often necessary to use a small 10x or 15x magnifying glass.

The change can be instantaneous or take some time; waiting 10 minutes may be necessary to be certain that no change will occur. The resulting colour is a significant identification criterion.

When colour change is completed, it is important to take a photo, as the colour will fade after a few hours. The final colour following the change allows for identification of the species.

Speed at which the flesh changes colour

Instantaneous change is characterized by an immediate colour change following a cut. It is important to take a photo right after the cut and then again once the colour change occurs; electronic cameras automatically record the time the photo was taken, allowing for the exact length of the process to be determined. The flesh of many mushroom species loses its ability to change colour twenty-four hours after picking. 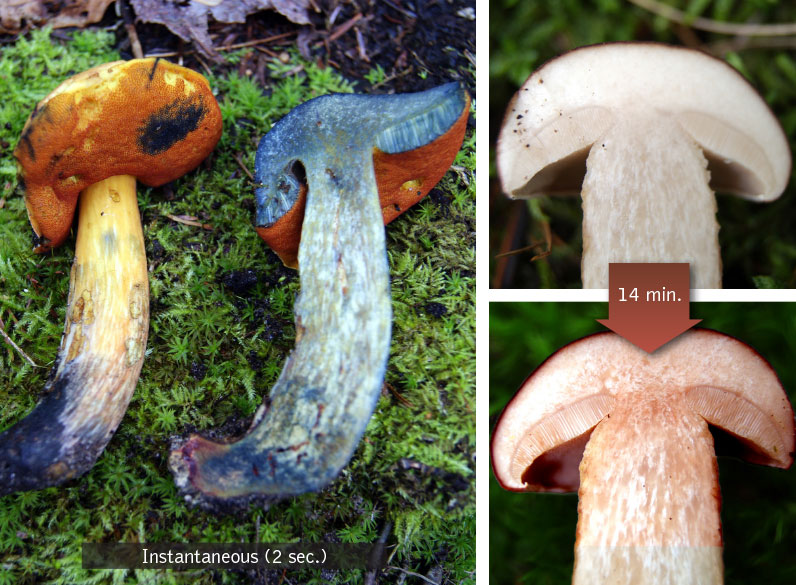 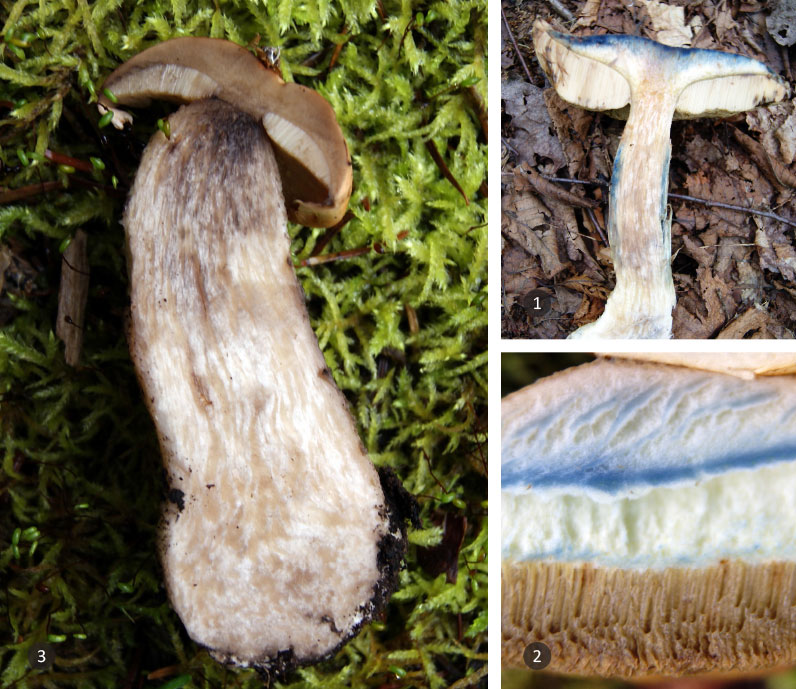